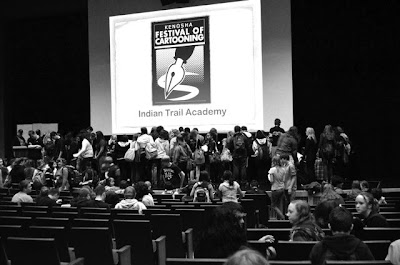 The Kenosha Festival Of Cartooning will officially go on hiatus after the conclusion of KFOC 2016.

The current plan is to take some time off and bring the festival back full force September of 2019.

And it has been a terrific success! Kenosha audiences have been privileged to meet and get to know over 30 cartoonists who are at the top of their field since KFOC launched in 2011. Not only have fans been energized by the presence of incredible cartooning talent, the artists themselves say they leave feeling refreshed and so gratified by the time they've spent getting to know their fans and their fellow cartoonists. Many a cartoonist has fallen in love with the Kenosha area and it's people. We've been lucky enough to draw audiences from all over the Midwest - some people have driven over 10 hours just to attend!

As if that were not enough KFOC has partnered with the National Cartoonist Society Foundation to run benefit auctions that raised over $22,000 for Kenosha area children's charities!

But it was never meant to be an annual thing - that part just sort of happened.

And it's time to take a break.

We feel putting the festival on hiatus for 3 years will allow us to keep enthusiasm high among the audience members and also lower the risk of "donation fatigue" among our patrons and supporters.

We hope you understand and will join us again  in 2019!

Promote Your Page Too